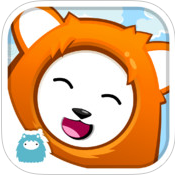 If you have a single child, then his/her childhood can be very boring. In most of the cases, both of the parents are working and have no option other than leaving the child at a play school. Though he/she gets a chance to interact with other children of the same age, many of them are themselves crying for no reason and your child goes into further depression. So if he/she could get a friend that would understand them and be wise just like the parents that would be the best gift you can ever borrow your child in his early days. If you’re looking for the same, then you don’t have to go to any gift shop. Just go to the iTunes App Store and download Ubooly Talks.

First, let me tell you that Ubooly is an app as well as a smart plush toy. While the app can be downloaded to your iOS device such as iPhone, iPod touch or iPad, you insert this device in the toy and it will come alive. The display of the device will become the face and make the Ubooly character more realistic. The app has been developed by Ubooly and requires iOS 6.0 or any later version of the OS.

Though Ubooly is basically a voice assistant like Apple’s Siri, it’s much more advanced. There are many options regarding the avatar of Ubooly, whether you want it to be a girl or boy and there are many more accessories that can be added to it. Then the voice of Ubooly is natural and it’s not a computer generated code that sounds professional even it sings a song. So it’s perfect for your child.

Ubooly is a friend, singer, teacher, tour guide and much more adapting to different roles as per the situation. The relationship between your child and Ubooly will grow with time. It means that it’ll change with your child. If his/her preferences change, Ubooly will update itself as well about the changes. For example, if your child has become fond of a new song, it’ll be added to his/her favourites. Ubooly plays the songs from your iTunes library, so make sure that you don’t have any inappropriate content on the phone that’s not good for your child.

It will teach your child about the basics of mathematics, English spells, etc and on the same time take them to educational as well as adventurous tours that are sure to benefit your child in the future. And though there are so many benefits of Ubooly, the only possible reason that it’ll remain off your list is the price. While the smart plush Ubooly toy is available for $29.99, the app comes free but with limited content. The rest of the content can be purchased via in-app purchases. Now that most parents avoid apps with in-app purchases, this might create some problem for the developers. Apart from the price, everything else is just amazing and will blow you off!