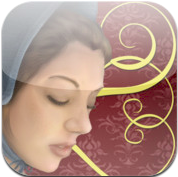 Victorian Mysteries: The Moonstone HD is a hidden objects game created by Square ENIX. I got this game free during the promotional period. Currently, it retails for $2.99 for the iPad version. The game story is about a stolen diamond called the Moonstone. You need to interrogate each suspect and search their rooms for clues to the game. The search of their rooms for clues will reveal a hidden object game where you need to find each object on the list for clues. Each suspect will have four rooms to search. You cannot proceed to the next suspect until you finish interrogating the first suspect.

However, I feel the zoom level of each picture is not set to the maximum. You can only pinch out one time and sometimes, I feel it does not give you that amount of clarity to find those hidden objects. It will be great if the game can allow zoom level up to two times. If you double tap on an area on the picture, it will also allow zoom level to two times.

In each level, there is classical music to accompany you during the gameplay. This actually relaxes your mind so you can achieve great results in finding that hidden object. I feel the list of hidden objects is not shown in one shot. Once you clear some of the hidden objects, more objects on the wanted list will appear from the right. In this way, you will not know how many objects you need to find in this game. You certainly need more time to clear one level as the list is not elaborate enough. I feel the developers done it this way because there is not enough space for the entire picture. It will be nice to have a scrollable list of hidden objects instead so that the gamer knows how many objects he needs to find in each level. Overall, I think this game is great for beginners who like hidden objects game. For expert or advance players who played many hidden object games, they may expect more out of this game.