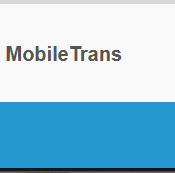 Transferring data from one phone to another is a tedious task. There are many ways to do so but they are either very slow or the process is time taking itself. Still it’s satisfactory enough if you have the same operating system in both the phones. For example, if you have an Android operating Samsung phone and another Android based HTC device, you can connect the two to your laptop and exchange data directly. But the main problem arises when you want to exchange between two different OS like Android and iOS or Android and Symbian. There is almost no choice, not even Bluetooth in case of iOS. So it’s almost like first you’ll have to copy the data to your laptop and then to your phone which takes a lot of time. But here we have a solution that is sure to bring a revolution.

With Mobile Trans, you can transfer the data simply by connecting the two phones with your laptop/PC. Then the app will detect the two phones and mark them as Source and Destination. If you want to change the source and destination, just tap flip. When both the devices are connected, the app will show the data available to copy. In case of Android to Android transfer, you can copy everything. However, in cases where Symbian is the destination phone’s OS, you can only copy contacts. For the rest of the combinations, it lies in mid-way. You can also transfer content between phones on different networks such as AT&T, Verizon, Sprint, etc.

The UI of the desktop app is one of the most intuitive I’ve seen. One of the best things that I see is that the data is copied to the concerned folders directly. You won’t have to do anything else other than selecting what to copy. In case of normal data transfer, what you do is first select the data and copy it to different folders. Also, if you want to clear the destination phone before copying any data, just tick the “clear data before copy”.