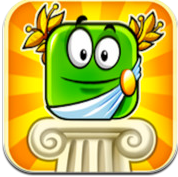 If you had been around the time when computer gaming was at its earliest phases then you would definitely have known about games like load runner and Pac-man where the game user interface is basically a collection of blocks that moves around the screen thus giving us an impression of moving objects. It had a certain aura and simplicity about it which cannot be found in today’s games. World of Blocks is an iPhone app game that recreates the enigma of that era with its simplicity, while maintaining sophistication in the actual game itself. The blocks in the game are categorized into different types, each having a character of its own.

The game has a story of its own where balls are shot at the blocks to annihilate them. These balls signify the good and blocks, the evil. As in the case of blocks, the balls too are of six types, namely, Franky, Speedy, Meedy, Biggy, Frosty and Sticky. Franky is the smooth cannon that shoots at the blocks until they are destroyed with the help of the other balls. Each ball has its own special feature that helps the gamer to plan a strategy to shoot at the blocks. Speedy is a smiley type yellow ball known for its speed. Biggy is on the heavier side while Meedy is an efficient slab breaker. Sticky acts like Jell-O and frosty helps break ice. Just choose your ball, set the cannon at the required angle and shoot!

World of Blocks is a strategy game that tests the IQ and logical reasoning aptitude of the gamer. Apart from the blocks and balls there are other primitive tools like round rocks, slabs and poles of wood that generate simple laws of physics and test your ability to respond accordingly. It is a highly intuitive and addictive game that can keep you engrossed for hours together. There are totally sixty five levels spread out over six exotic locations in the first release and still more to come.

The most interesting part of the game is that actual game time is very less, so one can completely focus on the skills to implement while remaining focused on the game the whole time. It is more of qualitative gaming. Kudos to WB Soft LLC for using such simple elements and derive a multi dimensional game out of it, that also satisfies its users. Apart from in English, this game is also available in German, Russian and French. It is completely installable on all Apple products (iPhone, iPad, iTouch) that have iOS 4.3 and higher.

Coming to the cons of this app, there is not much to say except that the difficulty levels seem to be limited making you wonder what the developers could possibly do in the next versions. But without doubt, the smooth touch, drag, aim and shoot act and the amazing resolution of the game itself keeps you wanting for more! Indulge yourself please.