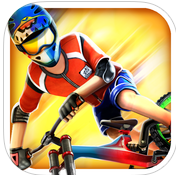 Always wanted to try the exciting adventure sport of mountain, but never had the guts and athleticism to try?Perfect.

This is where the world of inter-active sports is a win. With Xcite Mountian Bike- the apple game, made for iphone and ipad users, you get to be that make-believe mountain biker you have sometimes dreamt about.

The controls are the basic swipe and tilt- which once mastered, are easy as pie.

There are, however, over 18 different tricks and fakies to perform. Luckily there are lessons for this.

These include many real-world tricks such as: “back-flip”, “tail-whip” and “bar-spin”. After a little playing, you will at least sound like a real mountain biker-just sound. Don’t go trying anything silly outside now.

With a little bit of patience, they are relatively easy to master, although it does take some practice and co-ordination. This can be especially frustrating for newbies, who play games to avoid the work and skills needed in everyday life. Yet exciting for those who use games to stretch themselves and improve motor skills etc.

I must say I was slightly disappointed at the visuals. When compared to the array of games out there, with realistic graphics, these seem slightly archaic. Although, not bad for an phone or i-pad game, just not the greatest. There are times it almost feels like you are playing Mario Brothers, on bikes.

There are four environments to play in and the scenery is all pretty basic.

There is a certain amount of social interaction in which players can compete on Global Leaderboards and post their proud replay moments on their social media accounts, which can be gratifying when you do well and hilarious when you have no idea what you are doing. Posting my many failed attempts at a back-flip ( with sound effects) was especially hilarious.

Another point the sound effects make it somewhat entertaining. You will find that virtual-you has a lot of enthusiasm with the many “yippee’s and “ouches” you scream, giving a certain cute element to the game.

There is also a certain level of creativity within the game. These tricks can be combined and used any way you like. You really do get a kick out of doing something inter-actively athletic. Almost like a real athlete-without the hours of training, injuries, tons of money on equipment.

Over-all the game is a pass, but a scraped one. For me, the enjoyment of the game reaches its peak somewhere between just having learned almost every trick and having tried most of the trails. The problem with biking, even some other car games is that there isn’t much dynamism in the game.

There are no mysteries to solve, no storylines, just bike, road, trick. These typesof games still have their loyal followings but are not enough for longer-term engagement. This is the perfect game to kill time on an air-plane, waiting in waiting room, not something to rush how to play. Considering that, its scores an ok for enjoy ability.