Caps : A Game to Take you Down Memory Lane 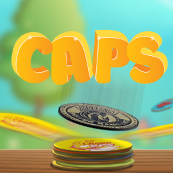 If you were a kid who spent his or he adolescence in the 90s, then the memories of the PoG, discs of plastic or cardboard that had to be collected and then used to challenge one’s friends are numerous. If you have boasted about your collection and often showed off the rare ones that you took pride in as a part of your collection, then here is something that you will love. Google Play has recreated it after so many long years, making it digital and updated in the form of the Android app Caps.

The most fun and enticing part of it where you challenged friends has been kept intact. However, your boundaries for challenging friends have been extended to the whole world online. Challenge opponents from across the globe. There are many thematic collections, each having many coins waiting to be collected. The game is so well made that you will not be able to keep yourself from building your own collection.

Take a walk down memory lane as you engage yourself in the most played games of your teens, only with a device having an Android operating system. You start off with collecting a few neat caps and gambling and move on to playing with a huge circle of friends that you can challenge from anywhere in the world at any point of time. Absolutely no restrictions to what you can achieve with this fabulous game. The tournament doesn’t end in this one.

You have to explore all the albums and build your collection of caps. At present, it boasts of a myriad collection of about 600 caps, the number increasing by the day. Each of these caps is a replica of rare caps from various themes including PoG, Mortal Kombat, Pokemon, Chupa Caps and more. Supplement your collection using game currency or in battles whichever suits your fancy.

There are also additional features to increment and boost your chances of success, keeping you hooked to the game for long. One attractive one is a bat cap which helps you make more successful blows and a good draw of the order of the moves. This happens following the Rock-Paper-Scissor System that we are all so fond of. These and other features add some masala to the game, making it worth playing for sure.

The developers have done all they could to make the app most alluring. The graphics are all HD and cheerful music has been added in the background to set the mood. The background of the game itself is not anything fancy or tacky but a simple realistic one. There is a choice to choose your opponent between computer, network and a friend. There are 16 game achievements, each of which comes with an award. The additional bat makes things more fun. The moves are governed by Rock-Paper-Scissors rules so that all is fair and well.

Caps is a fun game with a really good concept, which it fulfils to the fullest. There are also official rules and help for beginners to get started. Although it gets a bit repetitive and boring after the first round, the memories it refreshes within are truly worth giving it a shot.