M2S for Spotify – Music to Spotify in Seconds 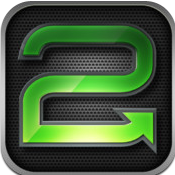 Music enthusiasts, here is an app you have to check out. How cool does it sound to transfer 100 iTunes songs to Spotify in 10 seconds? M2S for Spotify (Music to Spotify) developed by the Neuron Industries helps you do just that. Many of us listen to music several hours in a day and switch back and forth several times between the iTunes or iPhone music libraries and the Spotify music library. M2S for Spotify makes this process a breeze by letting users send the songs of their choice directly from their iOS devices to Spotify in a matter of few seconds.

M2S for Spotify requires iOS 5.0 or later and is compatible with iPhone 3GS, iPhone 4, iPhone 4S, iPhone 5, iPod touch (generations 3, 4, and 5), and iPad. The app is available for $0.99 from the app store for Spotify premium account users.

After being rejected by Apple several times, M2S for Spotify is finally up and running and most importantly, received a 4+ star rating. With this app, iOS users can transfer songs to Spotify in a fast and easy manner. A special feature of the app is that the Spotify music library is updated in real time. M2S for Spotify, instead of pushing the music files to the Spotify app, takes a smarter route where it sends metadata. Simply stated, the app matches the music files of the user to Spotify’s database. This music can then be streamed from any device where the service is available.

The app comes highly recommended because of its ease of use and the extreme speed with which it transfers songs. M2S for Spotify is compatible with iTunes Match too, which means the entire playlist or the music library is not required to be physically connected or synched to an iOS device. Rather, when a user subscribes to iTunes Match, the app can access their iTunes via the cloud and transfer it to Spotify. The Spotify Premium membership package is priced at $9.99 per month. The app allows the user to transfer up to 5000 titles into a Spotify playlist.

The app works in a simple manner. Once users download the app and launch it on their device (followed by tapping the app logo once), the app automatically looks up at the device’s iTunes library. Users can then proceed to add playlists and songs into Spotify from the device. For example, if you would like to send songs from your ‘Favorites’ folder, you may select a few songs or simply add all songs within the playlist. Once you select the songs and click on done, the app loads the songs to the M2S library. When you open the Spotify application in your laptop, confirm the songs that wish to bring into Spotify from your device and then hit done, the songs get transferred almost instantly to your desktop application.

M2S for Spotify is a terrific app for music enthusiasts and helps bring all music to one place instantly. You can listen to music from your iPad and talk from your iPhone.

Bad: The app is available only for Premium Spotify members.