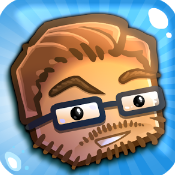 How many of us remember the ever growing snake that gets killed when it bites itself in the age old brick sized phones? Though ninety percent of smart phone users settle for the latest version of candy crush saga, there are passionate gamers who search the play store for new and in tingeing games in the form of Android apps and one such exciting game is the Nomanis crew. This article discusses a full and detailed Nomanis Crew- android app review that is impartial and lists the prime features and drawbacks in detail.

Game developed by Fire Totem Arena, Nomanis is the prime character who gets accidentally released from his metal cage by a guardian lazy angel. He gets blessed with enormous strength and gliding abilities and he needs to use his complete skillset to free all his friends by traversing across the island. There are multiple exciting levels unfolding in the game as Nomanis tries to rescue the caged Gorliks by fighting all the challenges with his super powers. This action adventure, side stroller, plat former game is a combination of classic game plots along with latest breath taking graphics and weird character behaviours.

Nomanis crew is a game that impresses gamers slowly. This game does not weave a spell the moment one starts playing, but as they catch the pulse of the game, most avid players have admitted that they got hooked to the game hands down. Attractive looks and brilliantly designed plots are the USP of this celebrated game. Each level has unbelievable varieties, full of graphics and increased challenges to free the gorliks. All the game characters and especially Nomanis’s ordeal to free his friends have been picturized well by the designers.

Nomanis Crew impresses audience with its beautiful theme and never seen before background settings. The side scrolling mechanics are to be watched for and every jump needs to be calculated and precise as maundering the game control is difficult for a beginner level player. Another interesting feature is that the gaming screen is used wisely and every portion is utilized well including the titular screen. These controls are focused to move characters left, right or even jump and plan an attack.

Nomanis is a well-known name in the social networking community as a twitch streamer and a mobile game released on his name is surely a winner among the gaming enthusiasts for its speed and also its low cost feature. This game is available for Android 4.0 and above versions. With exponential adventure build up at every level, the Nomanis Crew app game can be classified into the super hero genre which guarantees adrenaline rush every time a player touches his mobile screen. In short, if one has to say their Nomanis Crew- android app review in one line it goes like ‘Play it and enjoy the adventure to the fullest’.